BACK TO NEWS
Continuous ImprovementOperational Excellence

Heraclitus was wrong: Change is NOT the only constant. The failure rate of change projects remains constant as well, at about 70%.

Every next failure would prompt publishing an article with a comprehensive list of steps to take and pitfalls to avoid in order to succeed – but not the root cause of the problem.  In 1995, Dr. John Kotter was close when he wrote in his article “Leading Change: Why Transformation Efforts Fail” published in the Harvard Business Review; “that the change process goes through a series of phases <…>. Skipping steps creates only the illusion of speed and never produces a satisfying result.”  A year later he published his seminal work “Leading Change” containing his neat 8-Step Process for Leading Change, which may be considered the first in the infinite list of steps to take and pitfalls to avoid.  Another article for your consideration is “Why Organizational Change Fails” by Janet Spencer and Michael Watkins.

Still, the success rate of change initiatives does not improve.

From what I have learned from the change efforts I have led, participated in, or consulted, the root cause of the culture change failure is the unawareness of the change leaders that every transformation effort has to follow this four-stage process, and those stages in real life are far from being a series of evenly shaped and sized ascending steps.

The rejection–objection–perception–adoption model describes the sequence of stages every successful change project has to go through. It applies to virtually any organization that I have worked with on transformation projects but quite often, the change cycle is interrupted at the initial stages.

To achieve success, change leaders need to realize that every change effort must go through these four stages, and the first two of them – rejection and objection – may temporarily bring the performance down and kill the key players’ desire to continue the effort.

Those first two stages of the change process are extremely challenging. To get through the initial rejection takes a lot of effort and dedication by any and all change agents. Managers seeking change will encounter a 360-degree pushback from their colleagues who simply do not understand what culture change is all about.

The consultant trying to secure a “soft” performance improvement contract has to do the impossible: explain the 4th dimension to a strictly 3D (or worse, 2D) person who by the virtue of her senior position in her local food chain knows everything better. It is likely that she is simply protecting her image and position, and thus “doesn’t see this as beneficial to our company.” Good that she tried to be polite.

Declaring “Do not see how it is beneficial to our company” is usually an attempt to protect one’s role and position.

The rejection phase is hard to break through, but the next one, objection, may be even worse. During the objection stage, both, the change-seeking managers and the external consultants, will face a flood of animosity bordering on insult from the employees collectively known as “deadwood,” while the average employees will at best be watching the development but rarely support the suggested changes. This silent majority, basically the not-engaged employees who constitute about 60% (as per Gallup) of the workforce, are the “swing states” where the change leaders have to “campaign” 24/7 throughout the first two phases.

Similar to team effectiveness (Tuckman’s team-building lifecycle), this transformation process may be described by an S-curve, with a possible dip in performance during the objection phase that makes things even worse.

This performance dip is easy to understand if you have ever tried to perfect your stroke technique after decades of amateur swimming: it will feel despairingly awkward and slow for some time. Unfortunately, this perceived performance drop is often what kills the transformation project because the managers in charge cannot justify or explain this drop and choose to surrender under the 360-degree pressure.

Years ago, I was setting up a project management environment at a private high-tech company and have managed to get the owner through the first, rejection phase. We explained our vision and goals to the team and had received a reasonable buy-in. When I returned to the office the next day, I realized that the new process has already been scrapped.  According to the team, the CEO “passed by in the morning and said, &%$* it, just do as we have always done!”  Needless to say, when the top manager does not support the initiative, nothing good will ever happen.

“This is not possible!”

Another memorable quote from a client of mine, a top manager of a large company, reacting to the first transformation results: “This is not possible!” The fun part was that he refused to accept the savings numbers provided by his own financial department – the first short-term win that the team needed badly. The sad part: he managed to derail the project later on. In a way, he proved his point.

Dr. Kotter’s 8-Step Process for Leading Change is considered the gold standard of change. His inspiriting approach – almost always represented as 8 equal ascending steps or as a neat circle of 8 proactive verbs around “The Big Opportunity” – has fueled the model’s popularity for decades. But I daresay that Kotter’s model may have been the reason why the success ratio of change initiatives has not improved over the 25 years. Although still valid, these steps are indeed more about “leading” change, not actually “implementing” it. 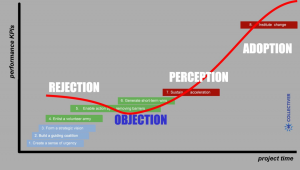 On the graph above, I added Kotter’s 8-Step Model. The steps are far from being evenly spaced throughout the change effort. Their ascending pattern, quite confident and optimistic in most representations, does not prepare the leader and the team for a probable dangerous chasm that precedes any significant and sustained improvement. This drop in performance is the moment of truth for the change leader and it is the root cause of many failures.

It is at this moment when the consultant must apply all the skills and techniques, and the aspiring manager must gather all the willpower and charisma – and demonstrate the unwavering belief in the imminent transformation success. Indeed, “lie, beg, borrow, steal” – but do not give up!

The trend will inevitably go up soon, and then the perception phase will start: the team, the leaders and even the bystanders (employees of other, non-participating units) – all will be surprised and impressed with the noticeable performance improvement they have demonstrated, often, with lesser effort. “We realize that we all work smart now, not hard.”

The performance will inevitably go up soon, with less effort: “We realize that we all work SMART now, not HARD.”

For the consultant, almost every day during the first two phases of a transformation project feels like Groundhog Day. (Yes, it is somewhat amusing – if not for the skin you put in the game.) But the onset of the perception phase always feels like the first sunrise after a polar night, to the change leader and to the team alike.

This spring thaw feeling, incredibly memorable and strong, will propel the team up the S-curve of performance. From this point on, the transformation process becomes irreversible: we enter the adoption phase.

The adoption phase is floating down calm rivers after white rapids, almost relaxing. What’s left to the transformation champions is to praise the perseverance of the team and celebrate the success with them. Still, adoption is a phase, not a festive milestone. Although the process has become irreversible, it is good to keep an eye on the key players, including the toxic ones that may still be around, and start expanding the transformation effort across the entire organization.

Keep an eye on the key players, including the toxic ones that may still be around.

With the success already demonstrated by the pilot department, the company-wide transformation will require less intensive effort even if only a small part of the organization has been “converted.” The total cultural transformation will happen sooner if the first wave of change has generated a good number of change agents on all structural levels: they will now lead the effort across the organization.

If you monitor employee engagement throughout the transformation project, its level will be significantly higher by the time you reach the adoption phase. According to Gallup, business units in the top quartile of engagement realize (among other things) about 20% higher profitability and productivity when compared with business units in the bottom quartile. A successful cultural transformation project has a realistic chance to take your team at least halfway through this growth and thus probably render the entire exercise free for your budget already within the first year. And of course, the future savings will continue for years to come.

What stops you from starting your business transformation already this year?